On Snapchat, a popular photo and video sharing app, users can “snap” a photo or a video, add a caption, and send it to a friend. But on the app’s most recent update, Snapchat removed its most overused but underrated feature. (Hint: It has nothing to do with photo or video sharing.)

Snapchat users may no longer view their contacts’ lists of “best friends.”

What is a “best friend” on Snapchat, you might ask? A “best friend” is one of three friends on a list that is made up of the people you Snapchat the most. It seems like a useless piece of information to have – who cares who your friends are frequently Snapchatting?

As an avid Snapchat user, I must admit that I used the feature on a daily basis and I already miss it dearly. My friends and I would look at other friends’ best friend lists just to see who was talking to who. Here’s why that information is useful: If a friend swore up and down that she was no longer talking to her ex-boyfriend, but her number one Snapchat best friend was her ex-boyfriend, we knew she was lying. Another example: If a friend’s boyfriend told her he didn’t communicate with his ex-girlfriend anymore, but that ex-girlfriend made an appearance on his best friend list, we knew he was lying. See how that works?

I’m not saying we should be able to find this information – in fact, I totally admit that it’s creepy. But we were given the ability, and humans are curious creatures.

Various news sources (I use the term “news” lightly) have already published stories about the new update. E!News released a piece called “Snapchat’s New Update Apparently Means Cheaters Can Run Wild.” (A little dramatic.) Buzzfeed published an article called “Here’s What Teens Think About Snapchat’s Latest Feature Update” that included an entertaining list of real tweets on the issue. A few of my favorites:

“so mad that they have got rid of bestfriends of snapchat.. when im talking to a hot boy i want my friends to know”

And my personal favorite, possibly appealing to more young adults than teens, from a user off of my own Twitter feed:

“Remember when we thought the new apple software would tell someone if we screenshotted texts? This is much worse. #snapchatbestfriends”

The good news is that this update is probably going to be beneficial to every Snapchat user’s mental health. But if you’re still mourning the loss of your favorite stalking tool, keep your head up. Snapchat’s CEO, Evan Spiegel, said the best friend feature will be back soon. 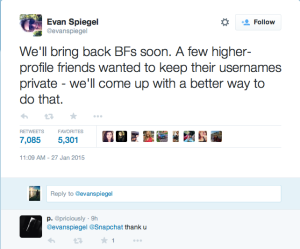